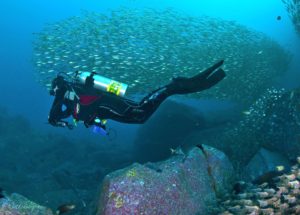 Until recently the terms “Trimix” and “recreational” seemed paradoxical to divers. Trimix was considered to be the domain of extreme divers wishing to go way beyond the depths regarded as safe for recreational divers. A gas for risk-takers prepared to endure long decompression stops in order to make a safe ascent.

The recent wave of reliable and affordable Trimix dive computers plus the increasing availability of the gas at ever more affordable prices has caused many divers to think again. After all, you are already diving with Nitrox and have learned that with a little care when analysing the gas, it offers many advantages over air. You have already adapted your equipment to be compatible with oxygen-rich gas mixes. Is Trimix so very different?

The recreational Trimix course will allow you to become familiar with using a three gas mix containing the same oxygen content as air but a reduced nitrogen quantity due to the inclusion of helium. It is as easy as diving with Nitrox which is why some divers are calling it Triox!

Practical skills are developed over a minimum of 3 no-stop open water dives. The IART OC recreational Trimix course is perfect for those divers wishing to benefit from reduced narcosis and a clearer head, but who do not want to venture into decompression diving.